This is a response blog given by Dr. Dilip Barad in our Maharaja Krishnakumarsinhji Bhavnagar University celebrate 30 Youth Festival AmrutRang 2022 after 2 years of covid we are celebrating grand 3 days Youth our give us task to observe various events and as a literature student we are able to literary and critical skills on the events which we had attended in Youth Festival 2022.

The Grand Intercollege Event – YOUTH Festival every year becomes a medium for the annual gathering for youth and it is the only place where students’ art meets talent. Maharaja Krishnakumarsinhji Bhavnagar University had organized a four-day youth festival on

wherein students from various colleges and departments were able to showcase their skills in various competitive fields. 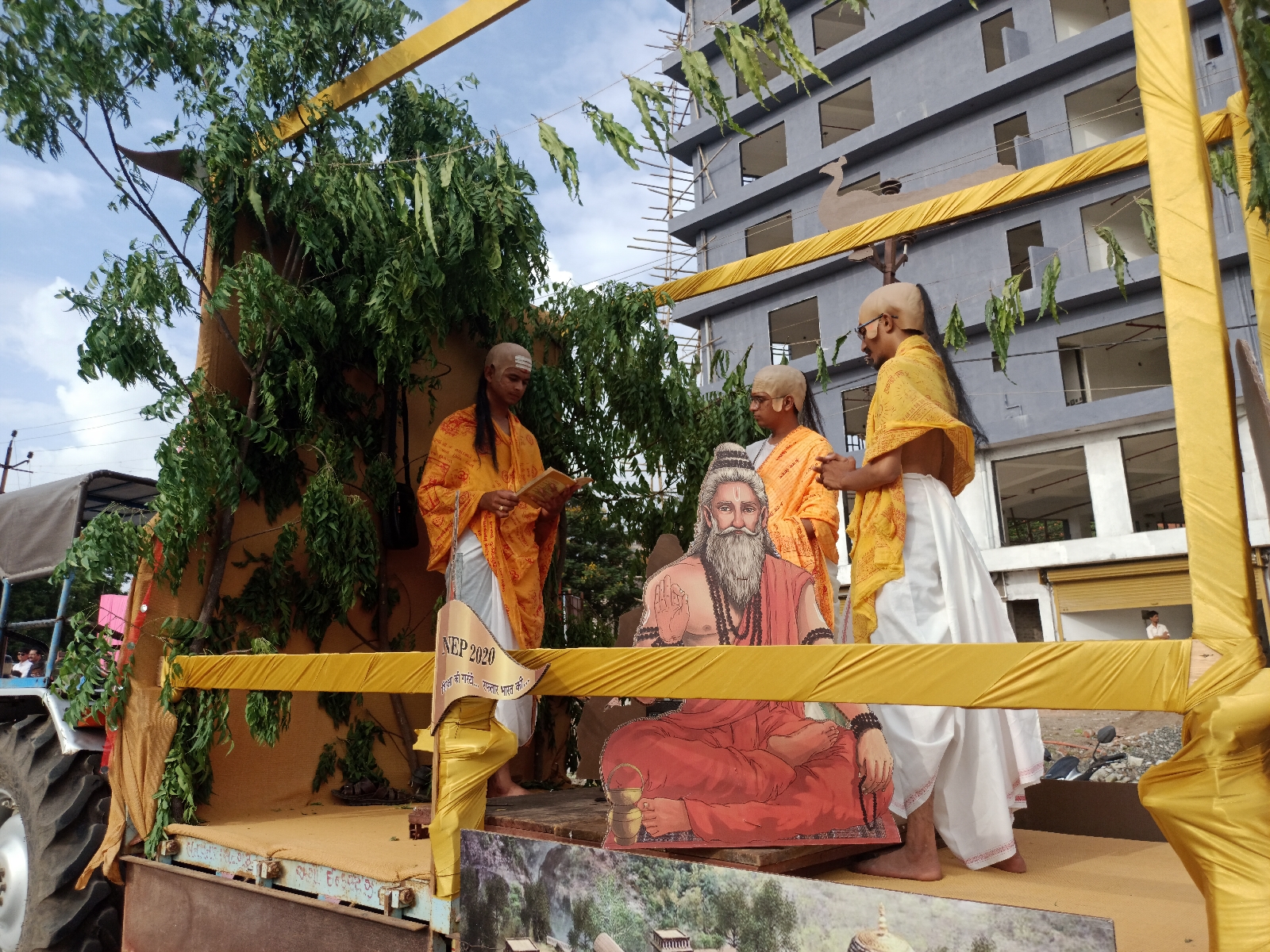 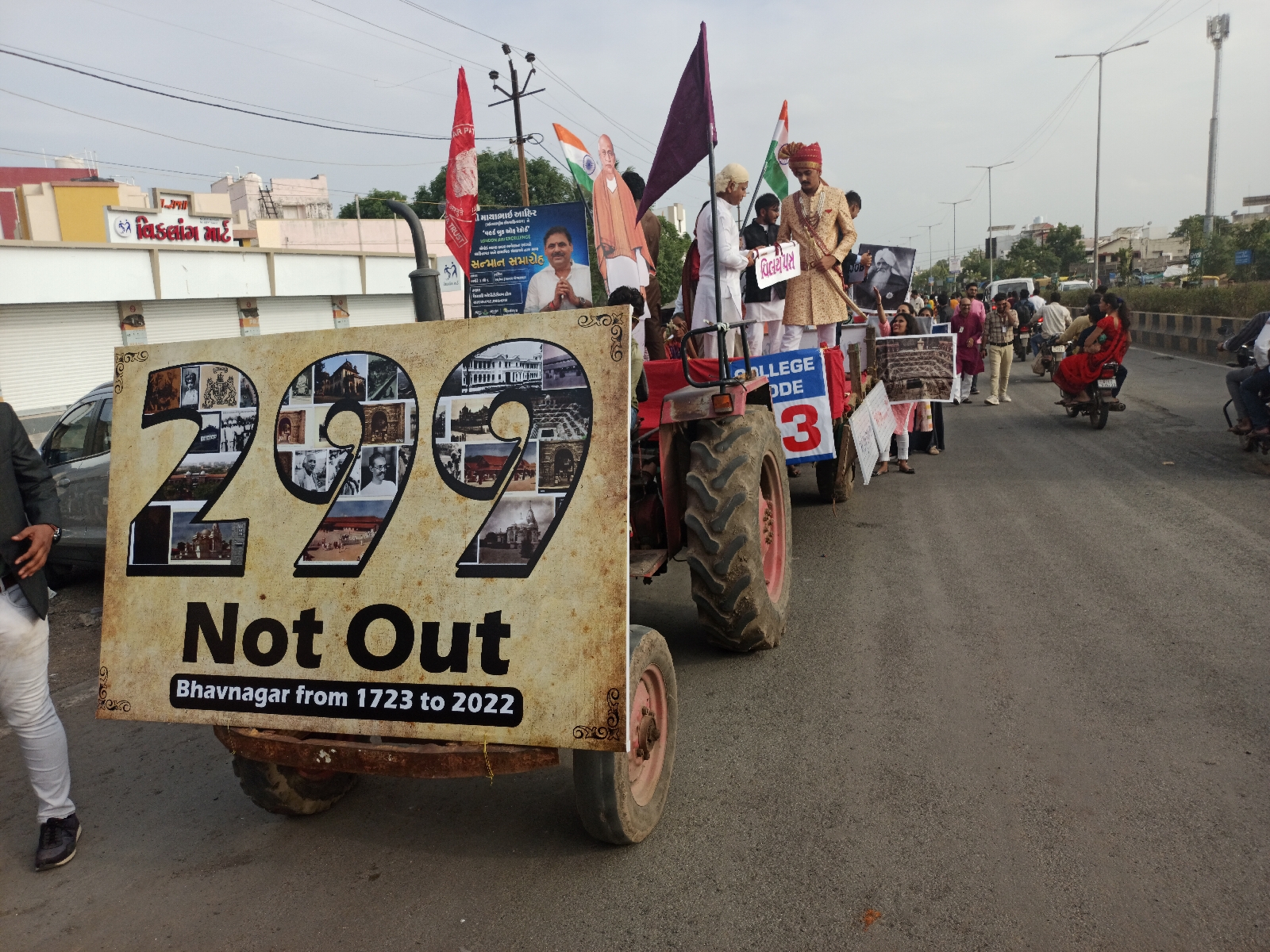 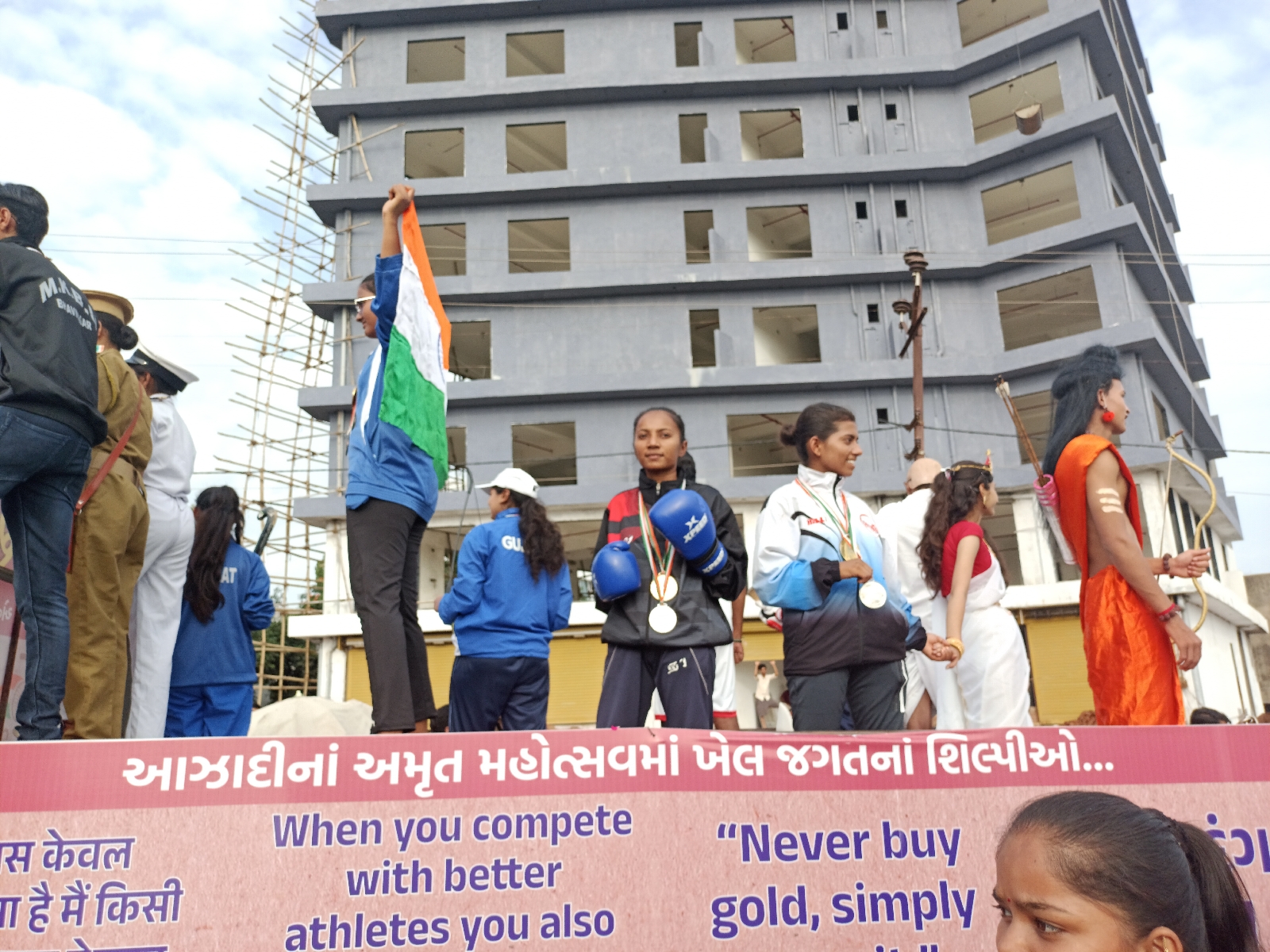 Performance by girls from KL Vidhyalay 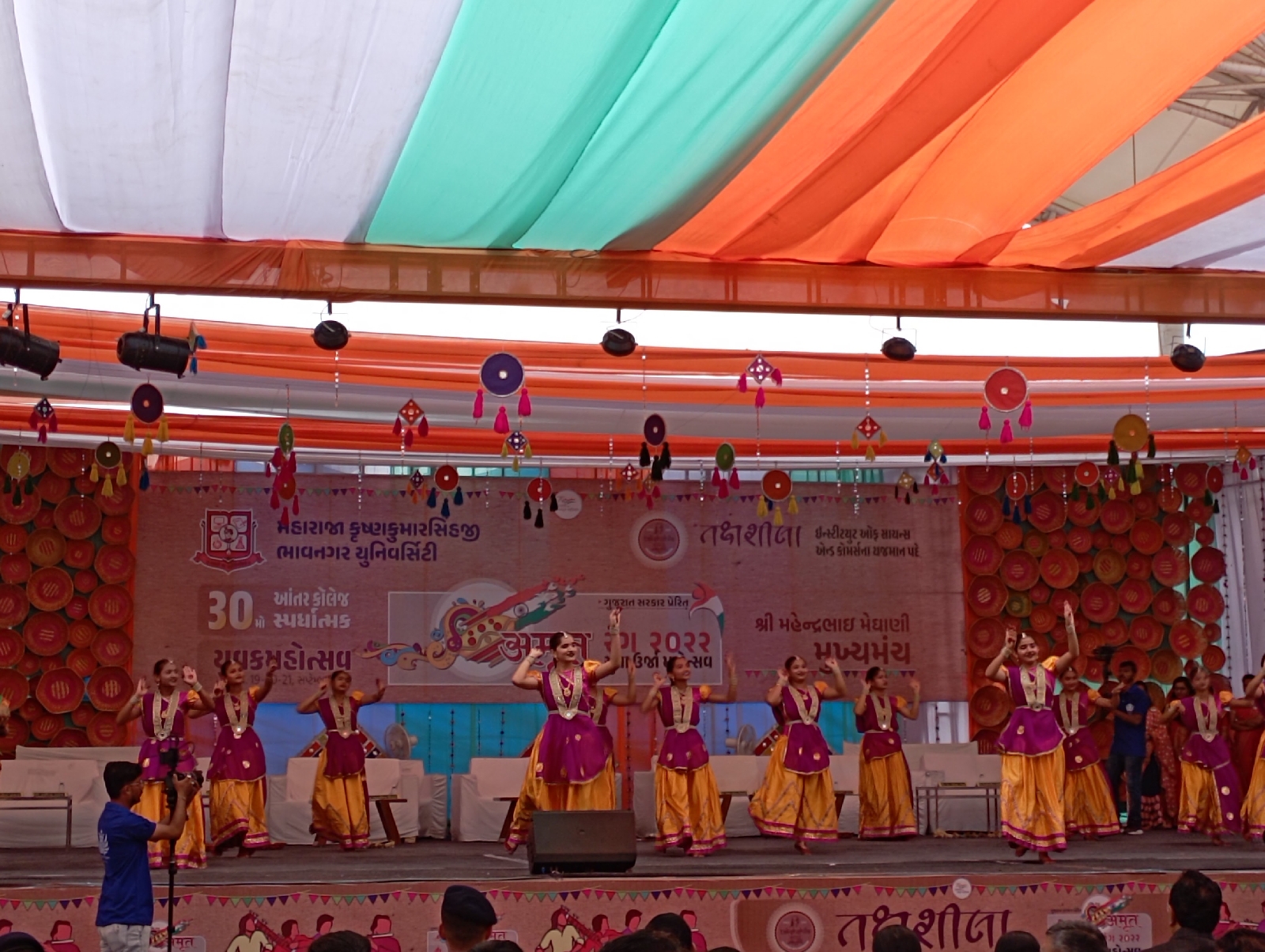 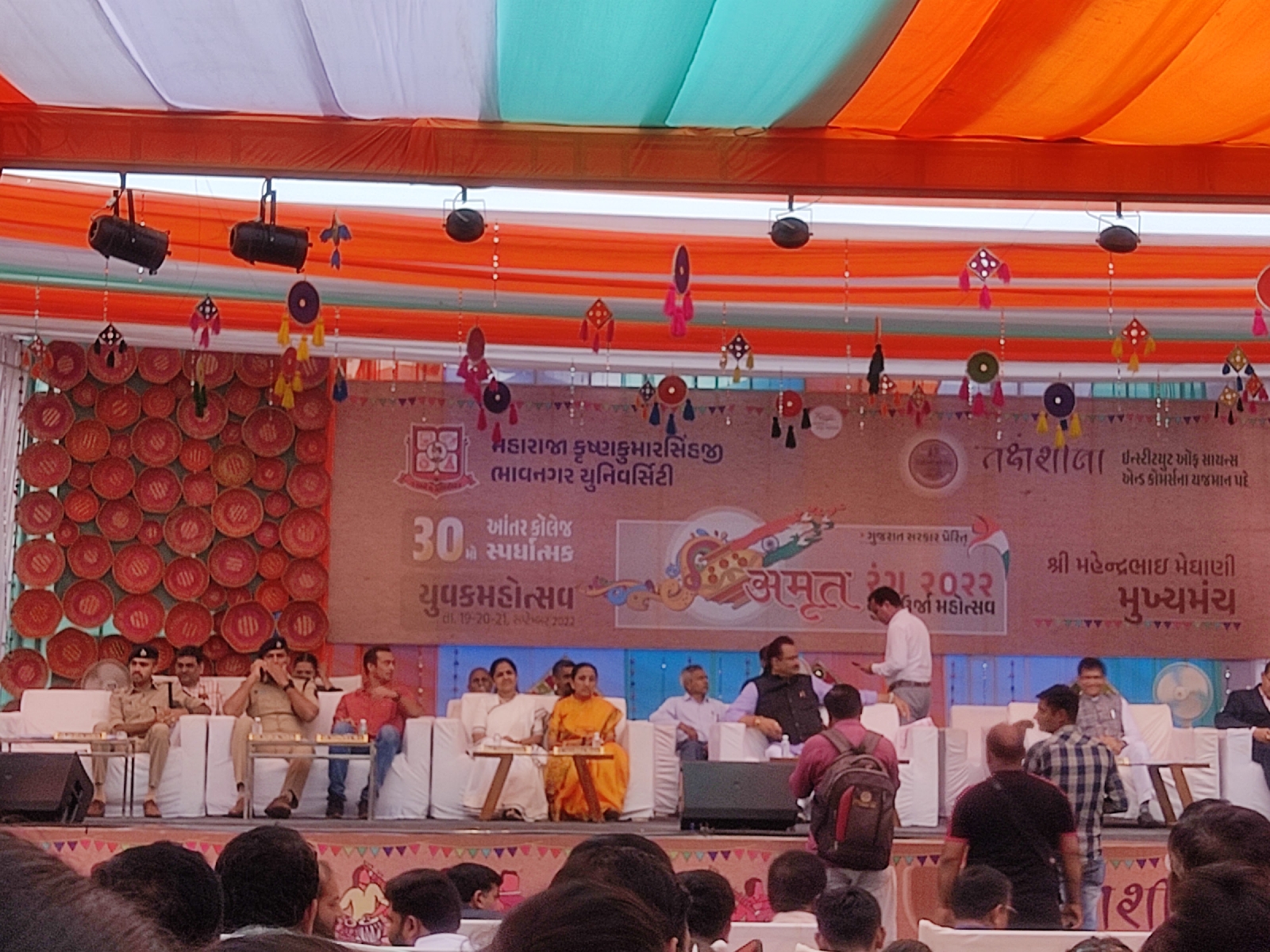 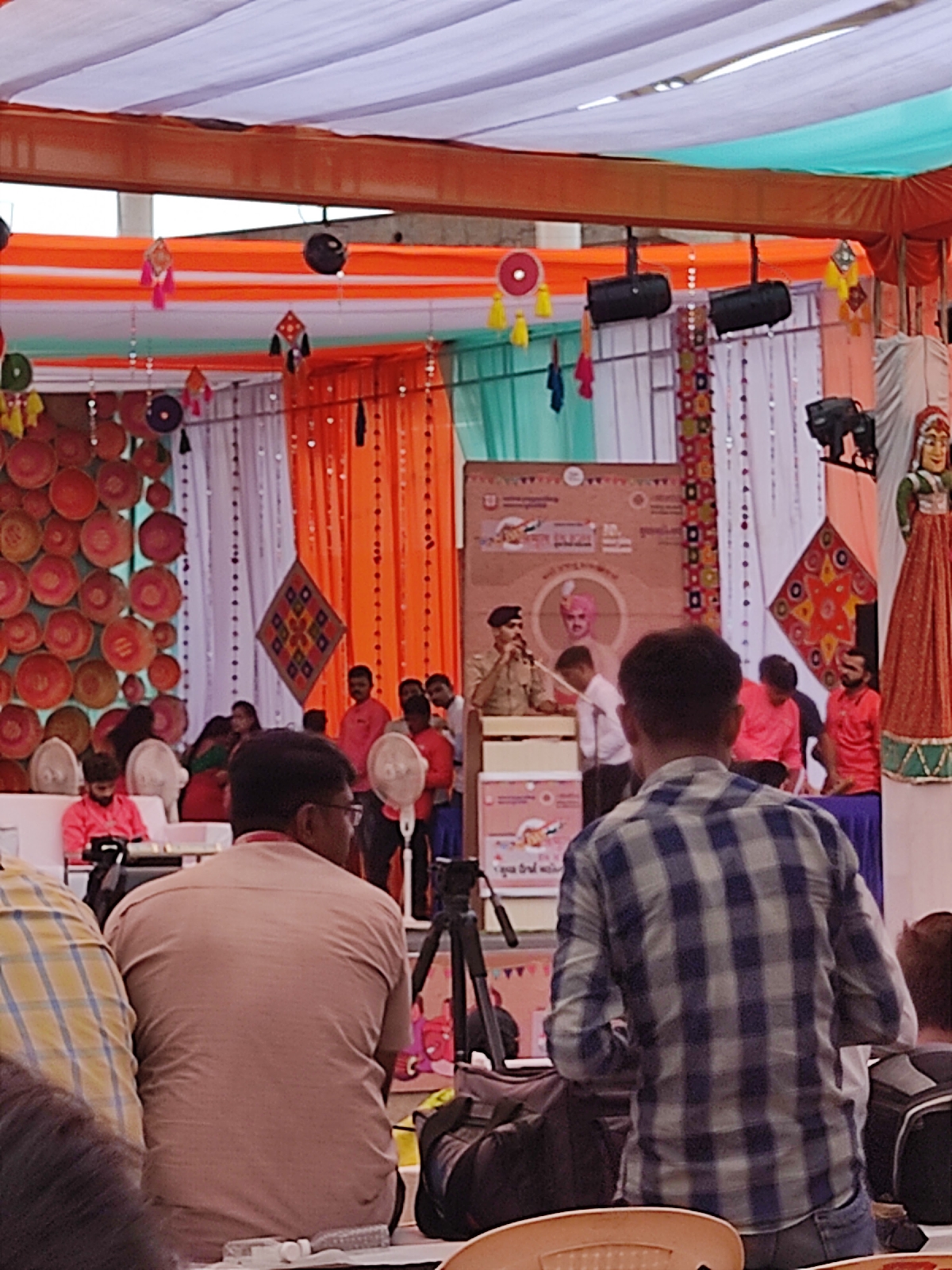 Themes represented in various tableaux of Kala-Yatra - 25/9/2019 - From Victoria Park  to University. 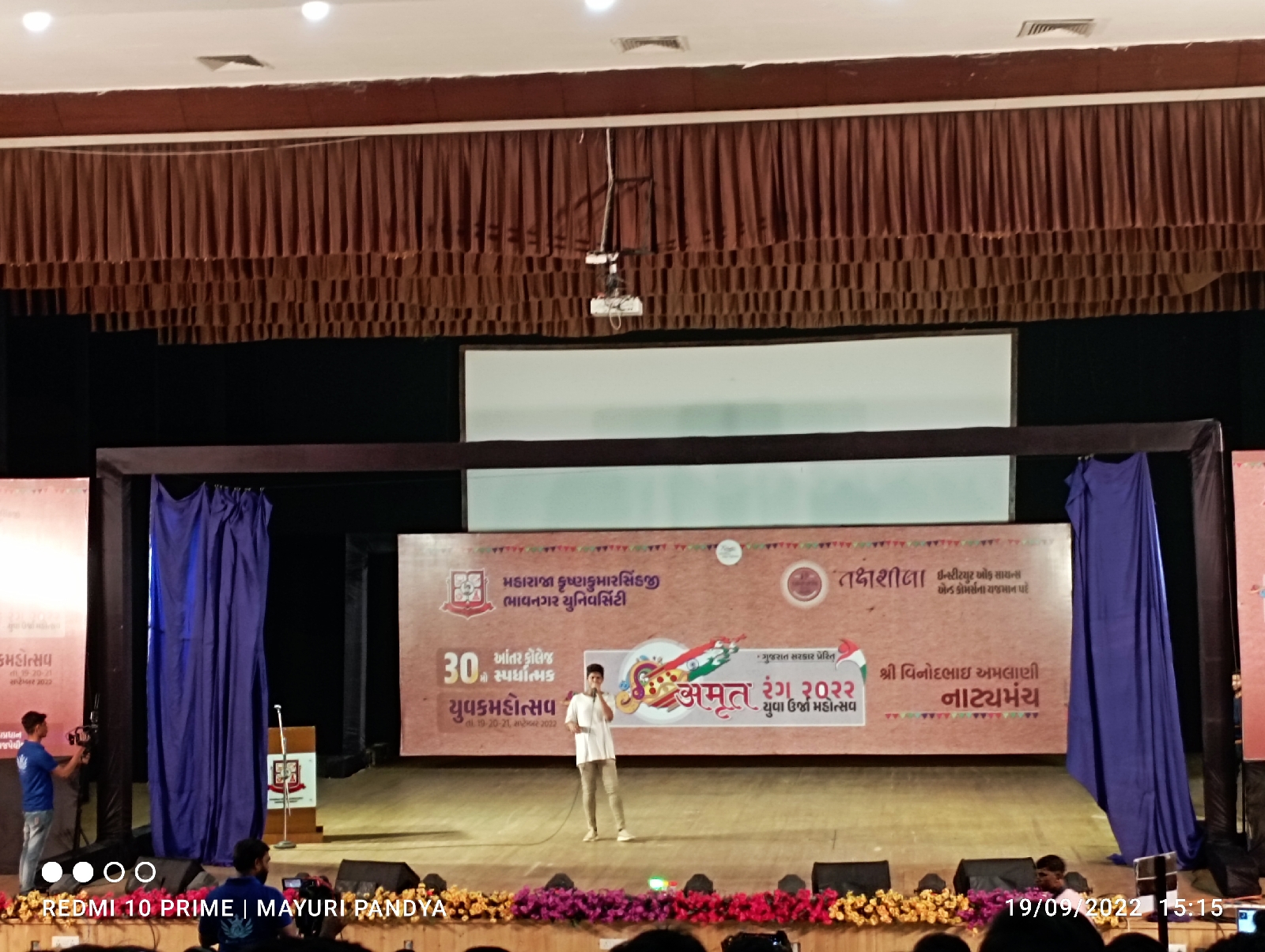 15 code Rockstar Ravi Dream scene and train,shaadi  All three are the same in voice of animals, birds, train and other things. 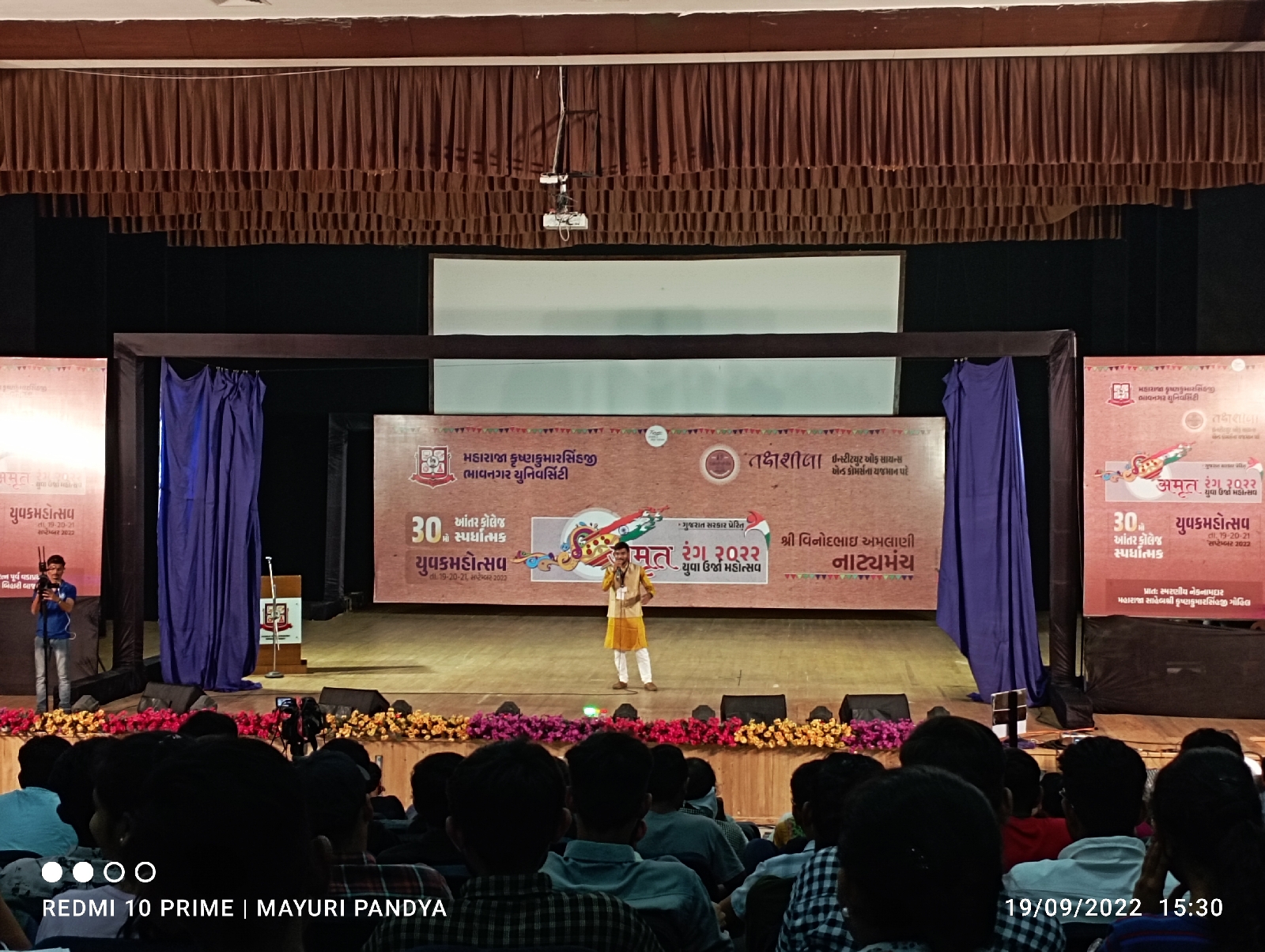 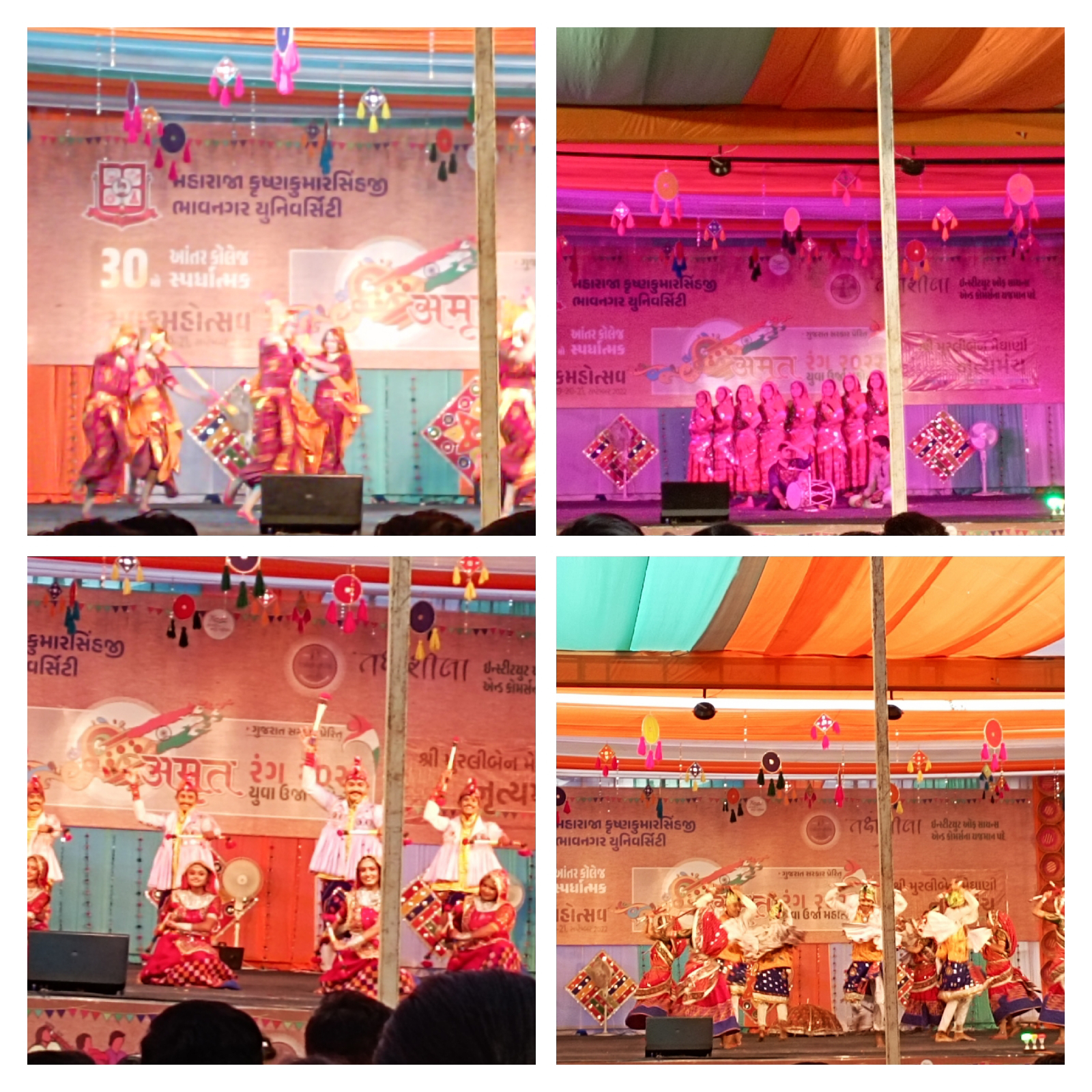 sahid, military life, used to go in the past, soldier life, living with family and working for the nation, giving them salute on death, 75th year of azadi, role of soldiers in azadi. 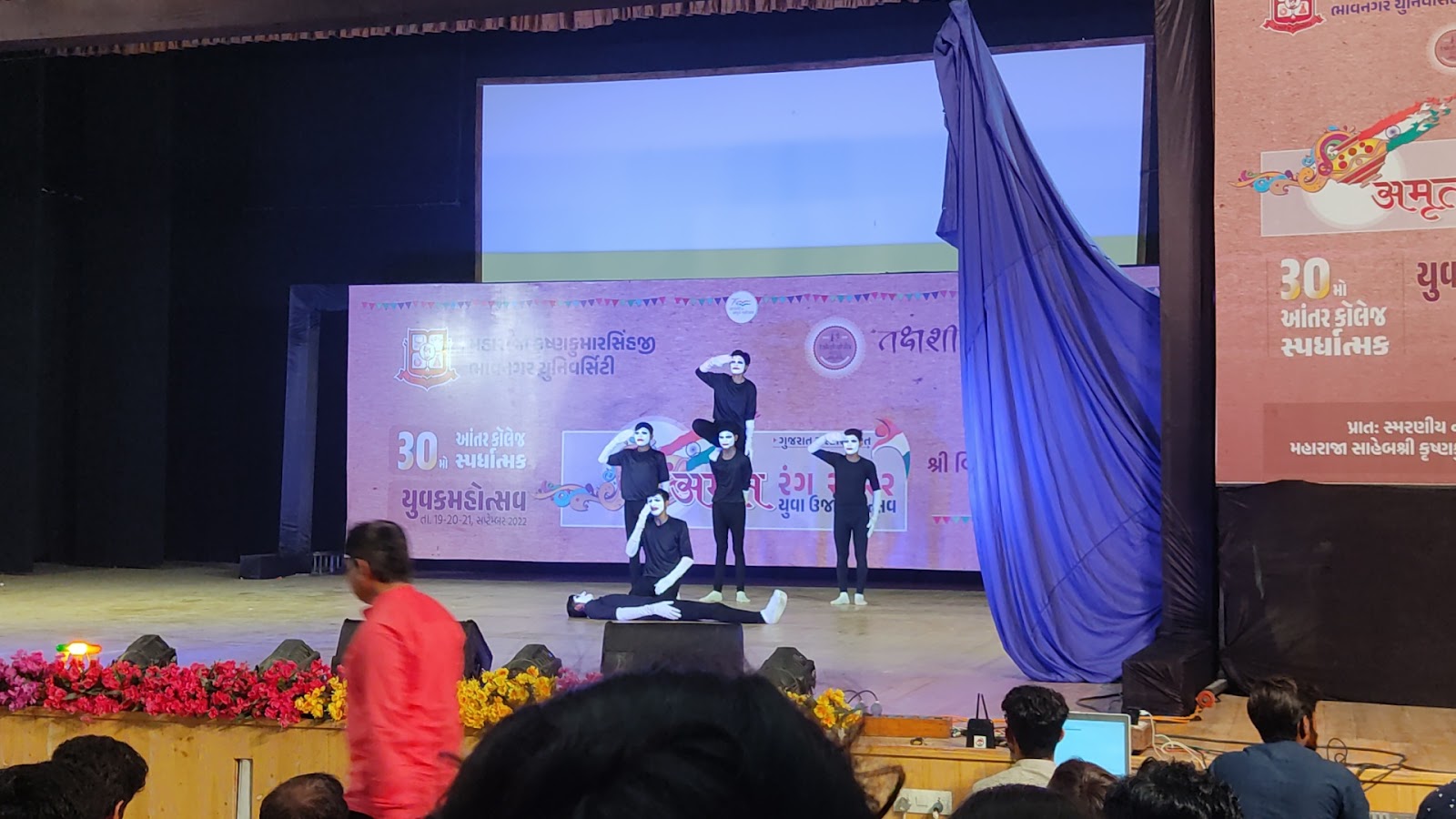 Other animals if they are uncontrollable then they kill the animals.

6 No. 15- Child growing, going school, being top, parents giving him mobile, transgender boy into girl, not being accepted by family and frnds, being alienated, getting in transgender community accept him , doing sucide, transgender is also a sex not other. 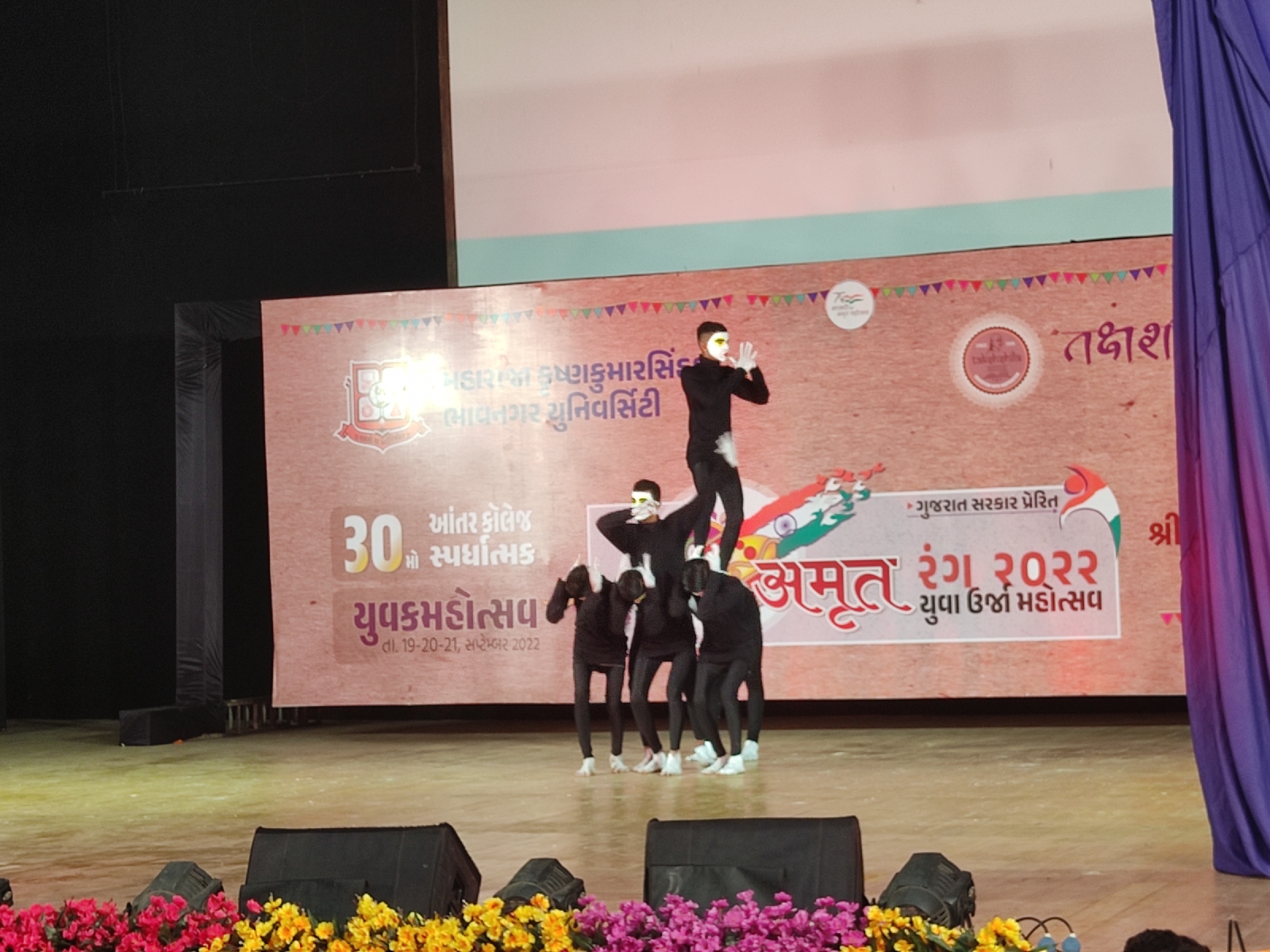 5 maximum they give extra 15 second

About Actor and his acting Ravan, Romeo, Hamirsinh, Zaverchand Meghani, Sadan hasan manto, Gandhi actor and his accident with electric shock and paralazed his body.

Unborn girl child and her suffering in Indian society

Mask wearing on her face which is invisible only two act laughing and crying rapist and victim.

About One Ring great performance

Difference in Hindu Muslim and nowdays blood shade in India because of religion, Rape, spot in rapist cloth and simple human washing by Nirma Powder

Human with so many refreness Gandhi, Socretish, Krishna, Jallianwala Bagh and so many 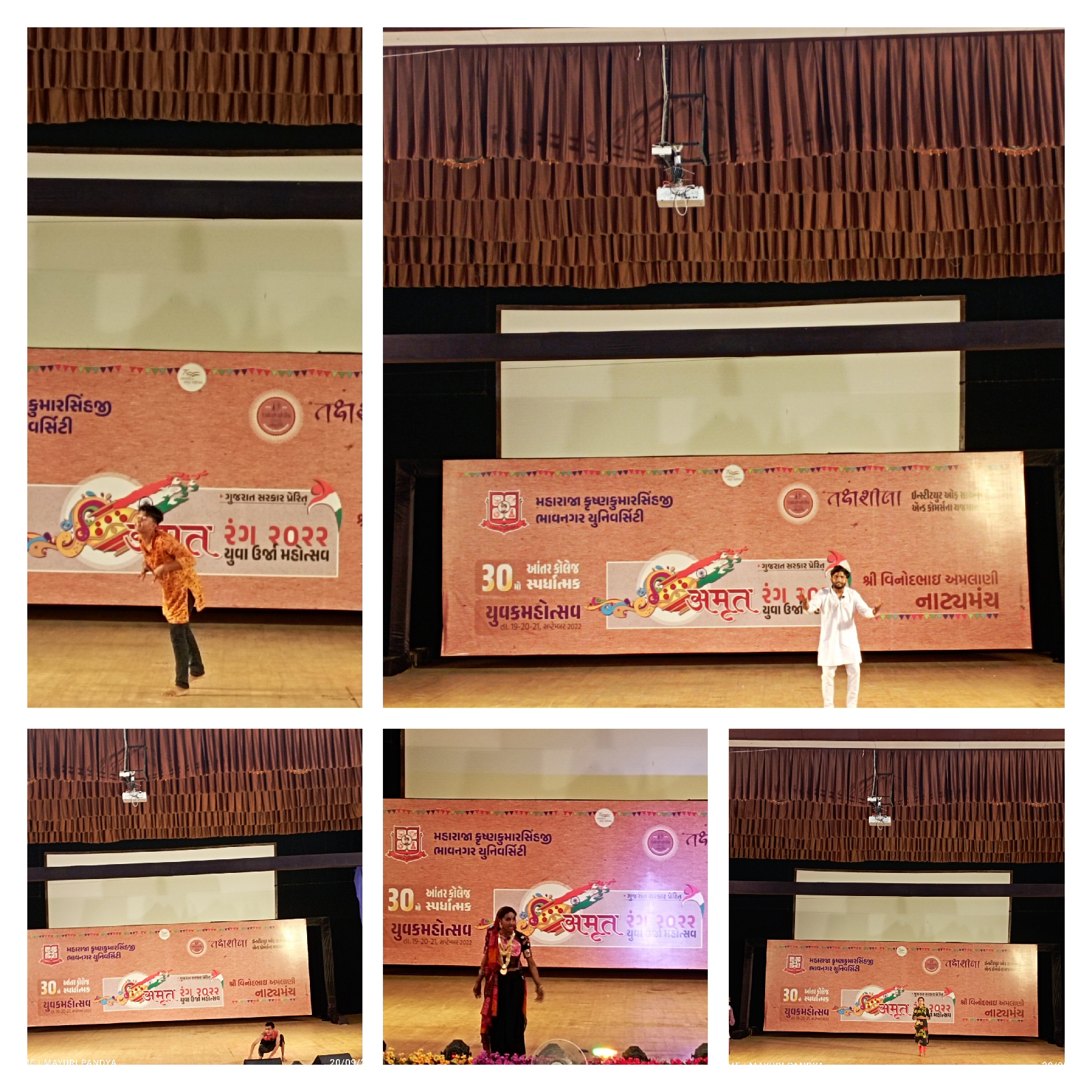 The major themes of all the drama performances contained a common theme- 21st-century view towards age-old concepts, feminism, Woman's Safety Almost all performances were from a modern perspective and some of the plays were based on current themes while other plays followed the script of great dramatists or short story writers.

Firstly, discussing about One Act Play (एकांकी), I would like to describe the themes of two plays here in detail-

1)Ashifa ek paheli sanjay srivastav writen their concept was very unique told about feminism and shurpankha and her point of view and draupadi and her feminism nice performance and very good acting vivah ek balatkar and acid attack on girls most important thing Rape but tragedy flash back with Ashifa one girl child who was victim this is about tragedy in our nowadays india we grow up but still even small girl child are not safe in our nation we speak Bharatmata but in Bharat women's are only toys for male dominated society. This play is all about social awareness. 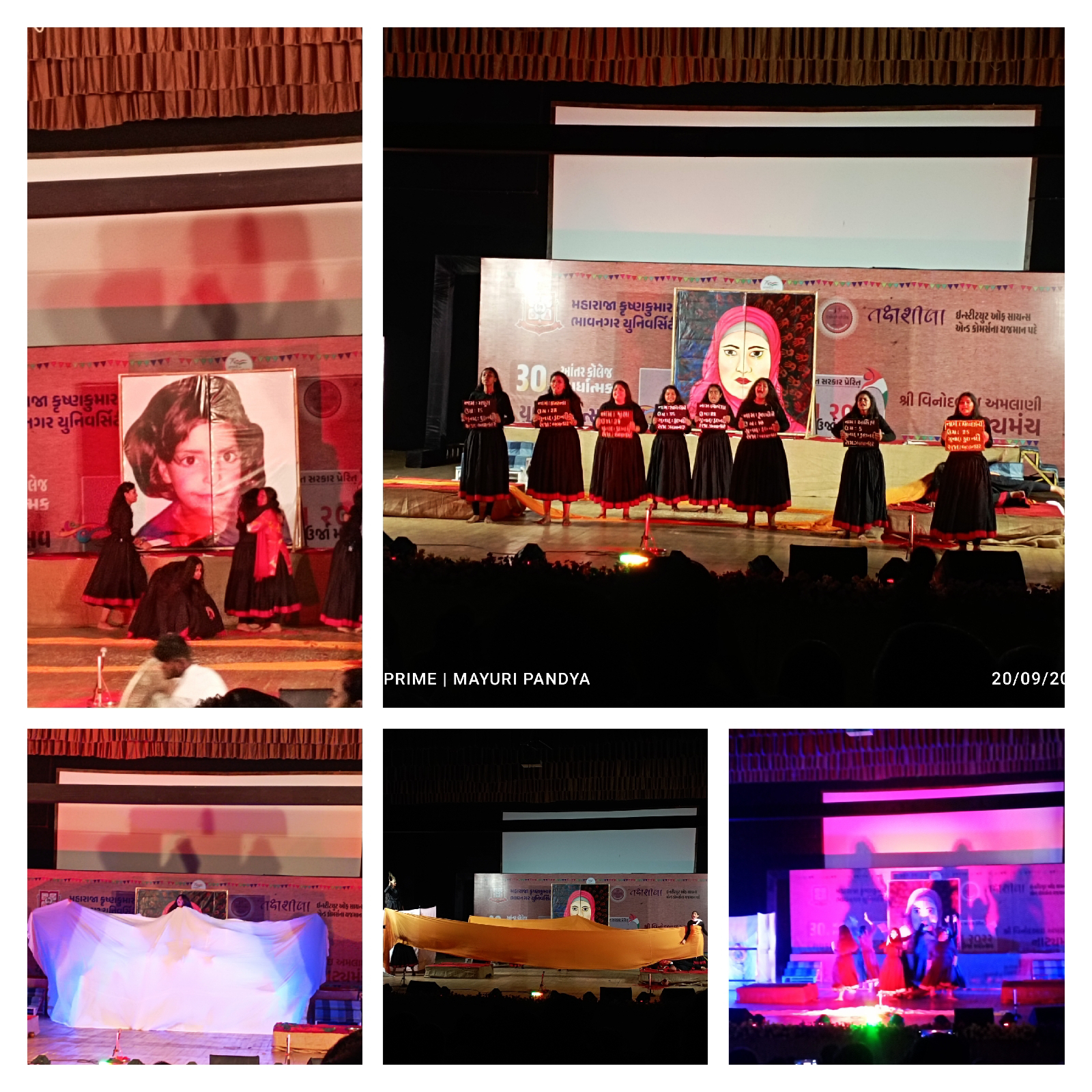 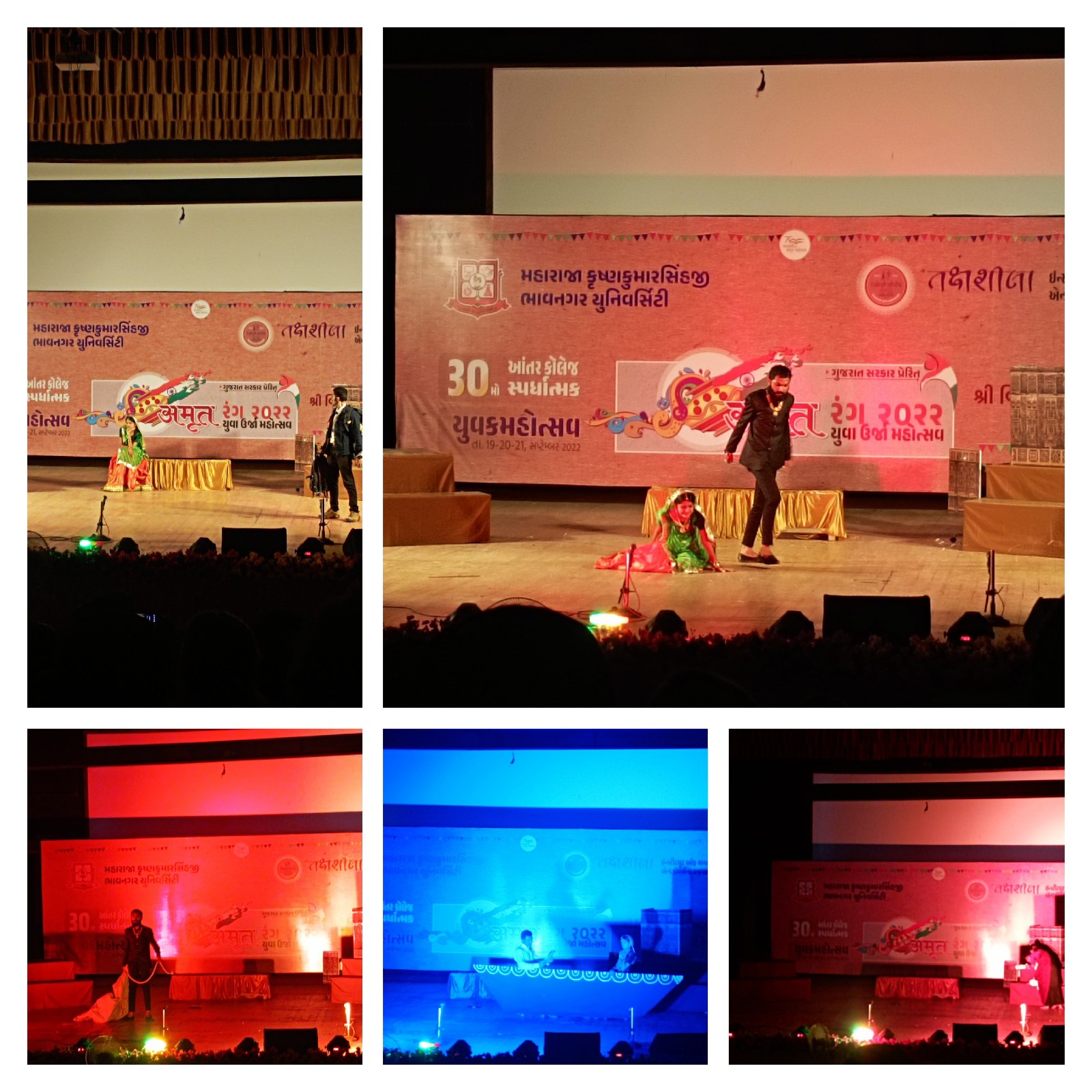 According to Aristotle, Plot, and action plays a vital role in tragedy performed on stage. His views can be applied to this tragedy. According to Aristotle, a tragic hero should be a person of great reputation or prosperity, he should be above common level. The tragic hero of the play is Kumar, he is a man of high rank. He becomes king of the Karangath empire. As proposed by Aristotle,  the tragic character should be lifelike and true to type. The character of Vikram kumar is a very lifelike character. The story must be one. There shouldn't be a double plot but in this play, it follows the unity of time and action.

This is story about Royal Family love story and

Panna is mistress of king and king give his all empire to his nephew  vikram kumar prince good painter  heroin Panna her background was different she found in prostitute house by king  and one day both are boating Panna and Vikram  found them with ear other and prince make her painting but it was half without any discussion king thinking like they have affair with each other shivratri celebration king making domestic violence against Panna died after death she give latter to kumar he was read letter mad after this Tragedy. The play starts with the madness of prince flashback with kumar. 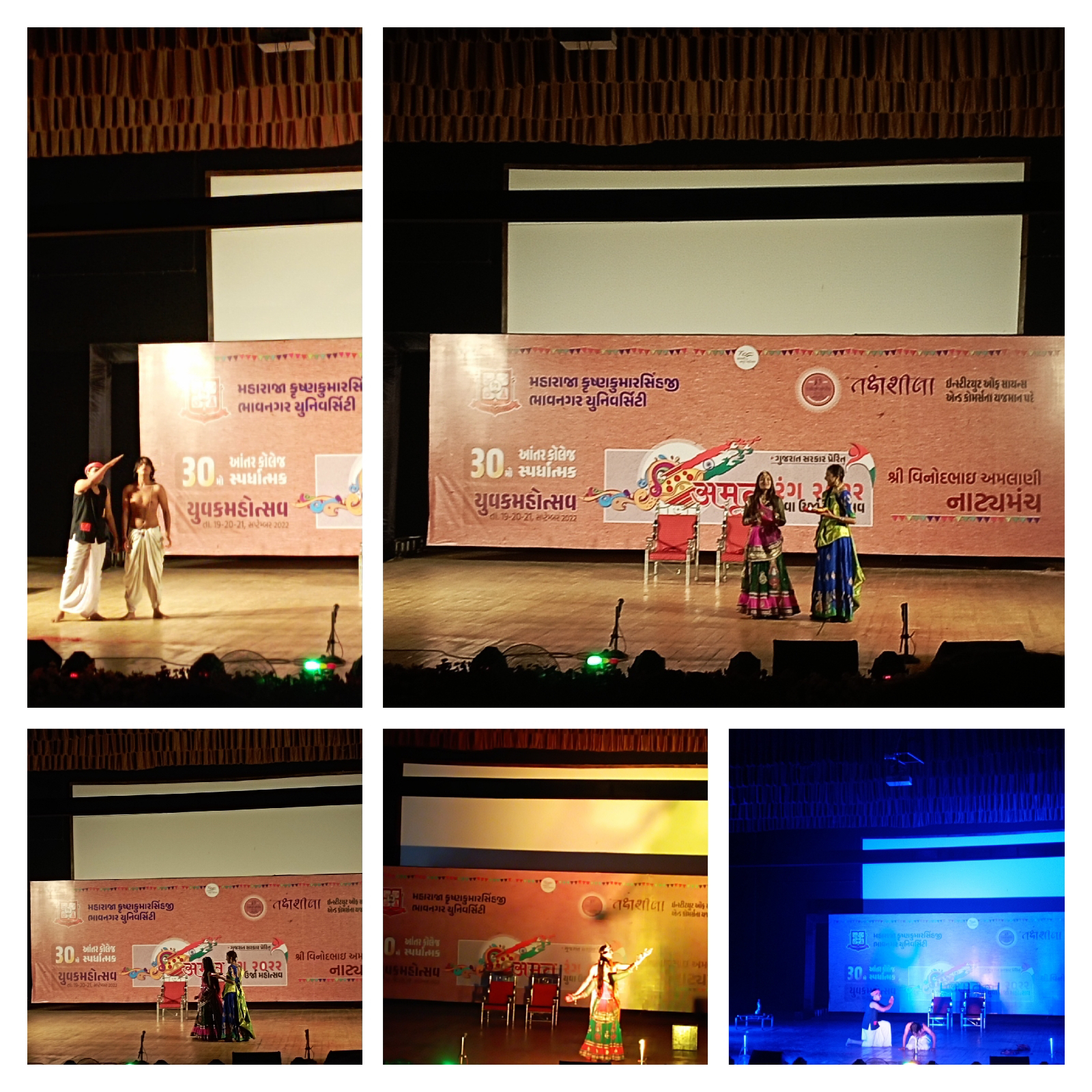 A kind of love story one simple man and princess light humor tragedy also on that he was simple human for love he became changed himself as a God at the End he realized human is better than God.

Start with man(meraman) who died and one woman (Jaan Bai) sitting near him people challenge protagonist for revenge to his brother murdered and his was continiously play chopat her father tell her to merry is brother in law (manhur) she recall her memories with his husband beautiful scene they create too woman one after merry waiting for husband and before his dead waiting his husband she was talking with her self by too character she marry with her brother in law (Diyar vatu) but after merriage she getting news that his husband mudrered by his brother so she give poison milk to his brother in law he died. Flashback of murder and fight was very nice main protagonist woman dialogue was amazing 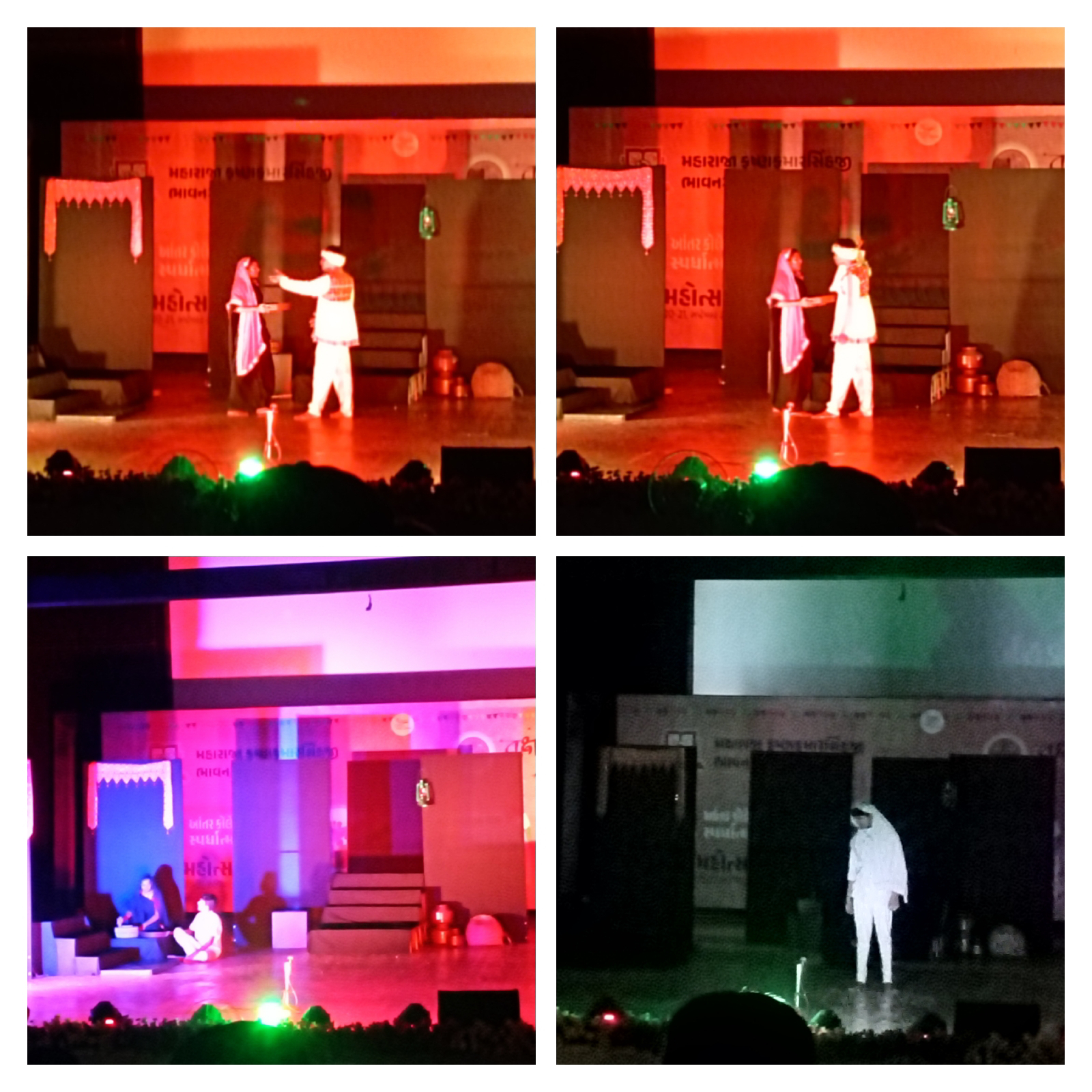 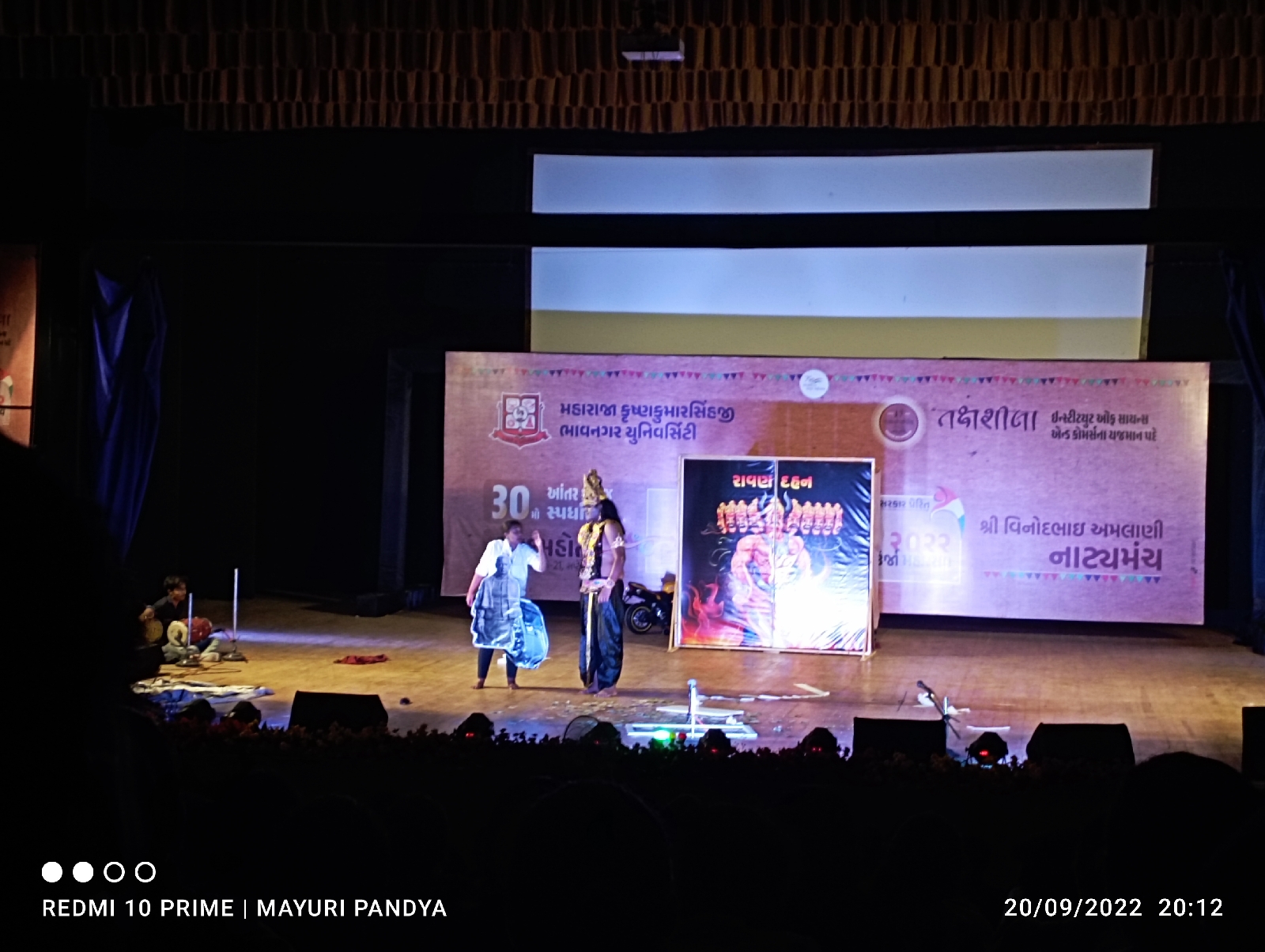 2.Technology and village life too generation conflict one son was in Army and one daughter who have dream to go in army but funny act and another young child modi Diya jalav Thali bhajao Niraj chopda sanitesar vaccsion surat Girshma and Jainil story,rape in corona who are going Desh and woman died with child good ending happy ending move towards Education 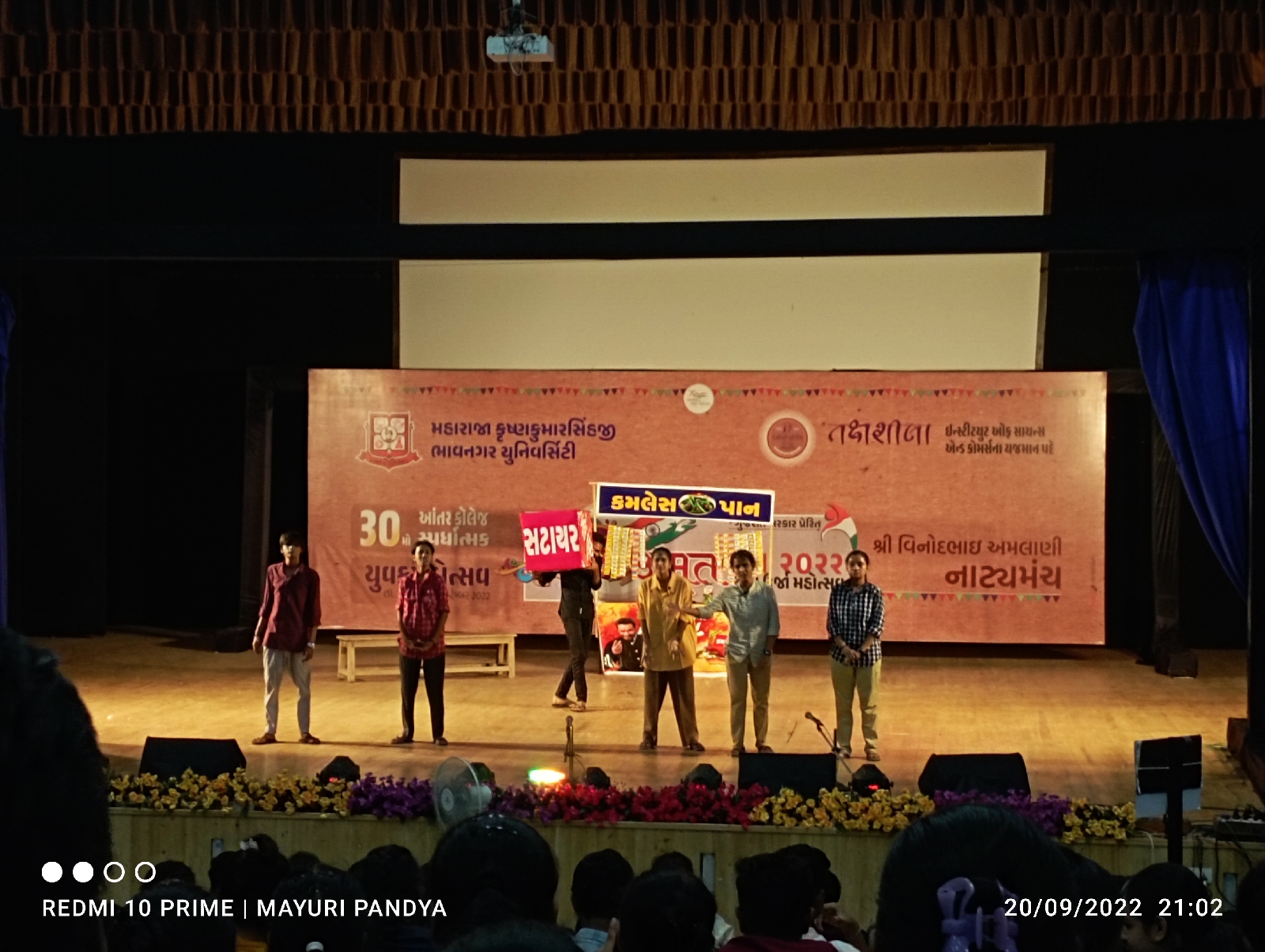 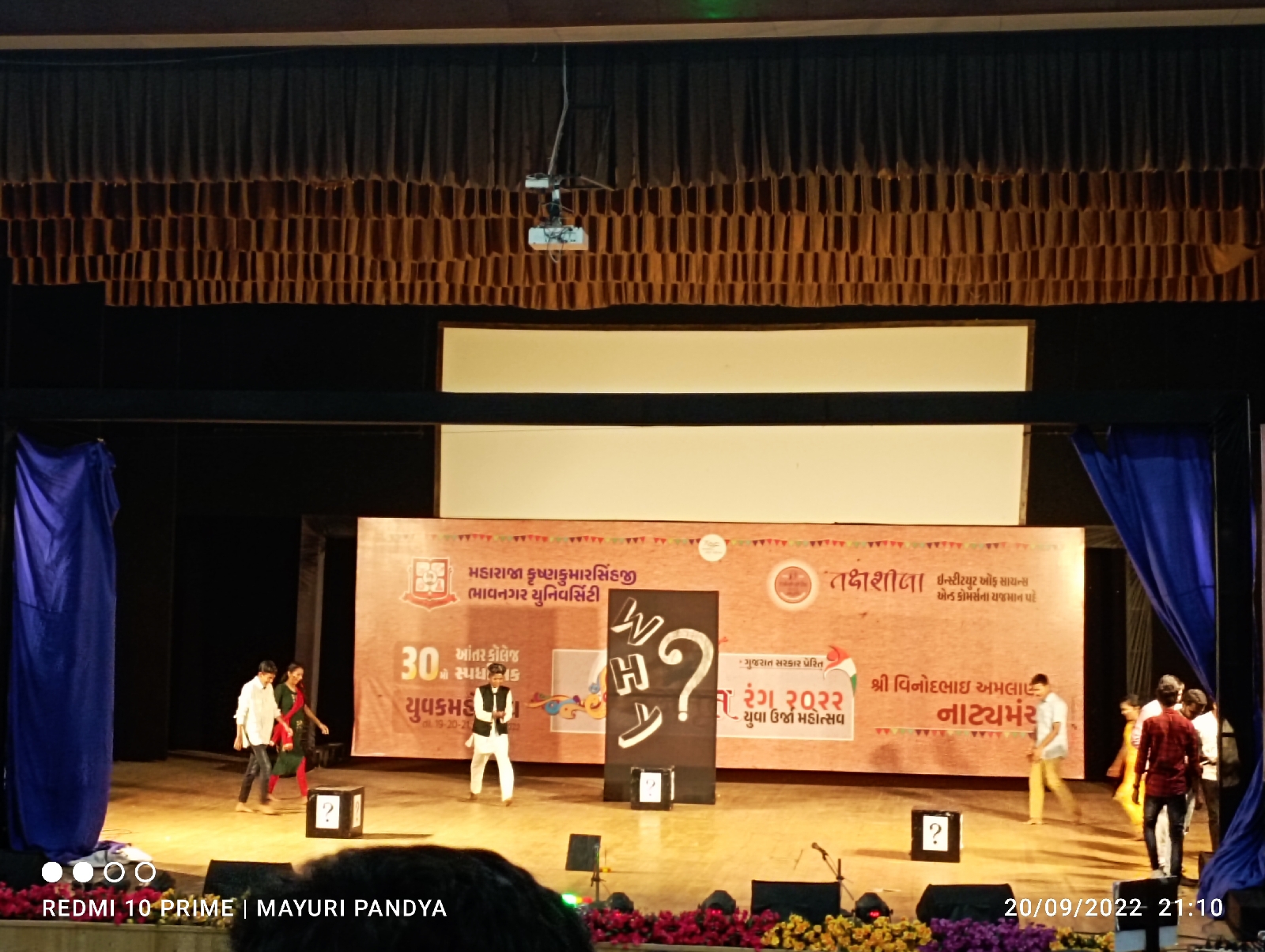 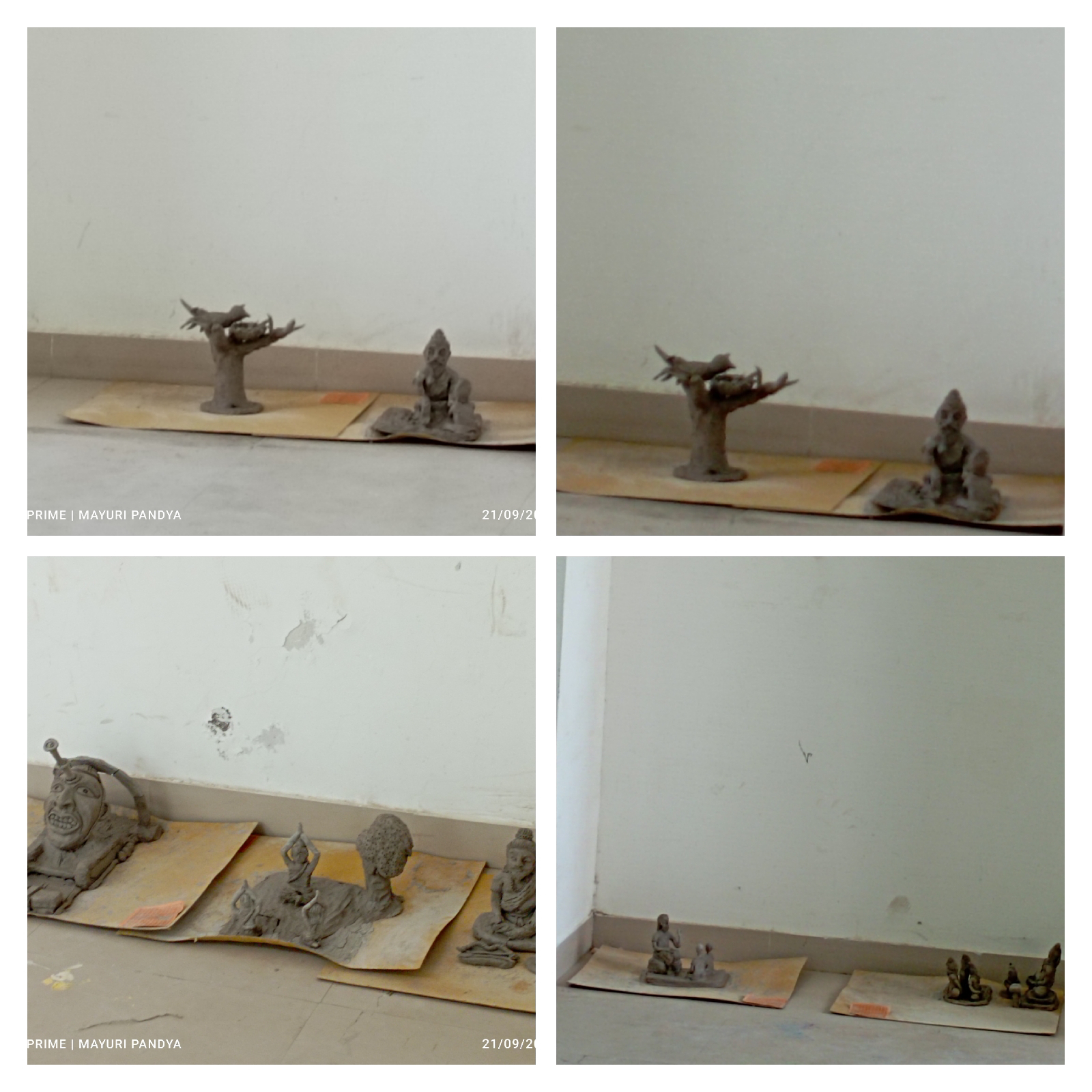 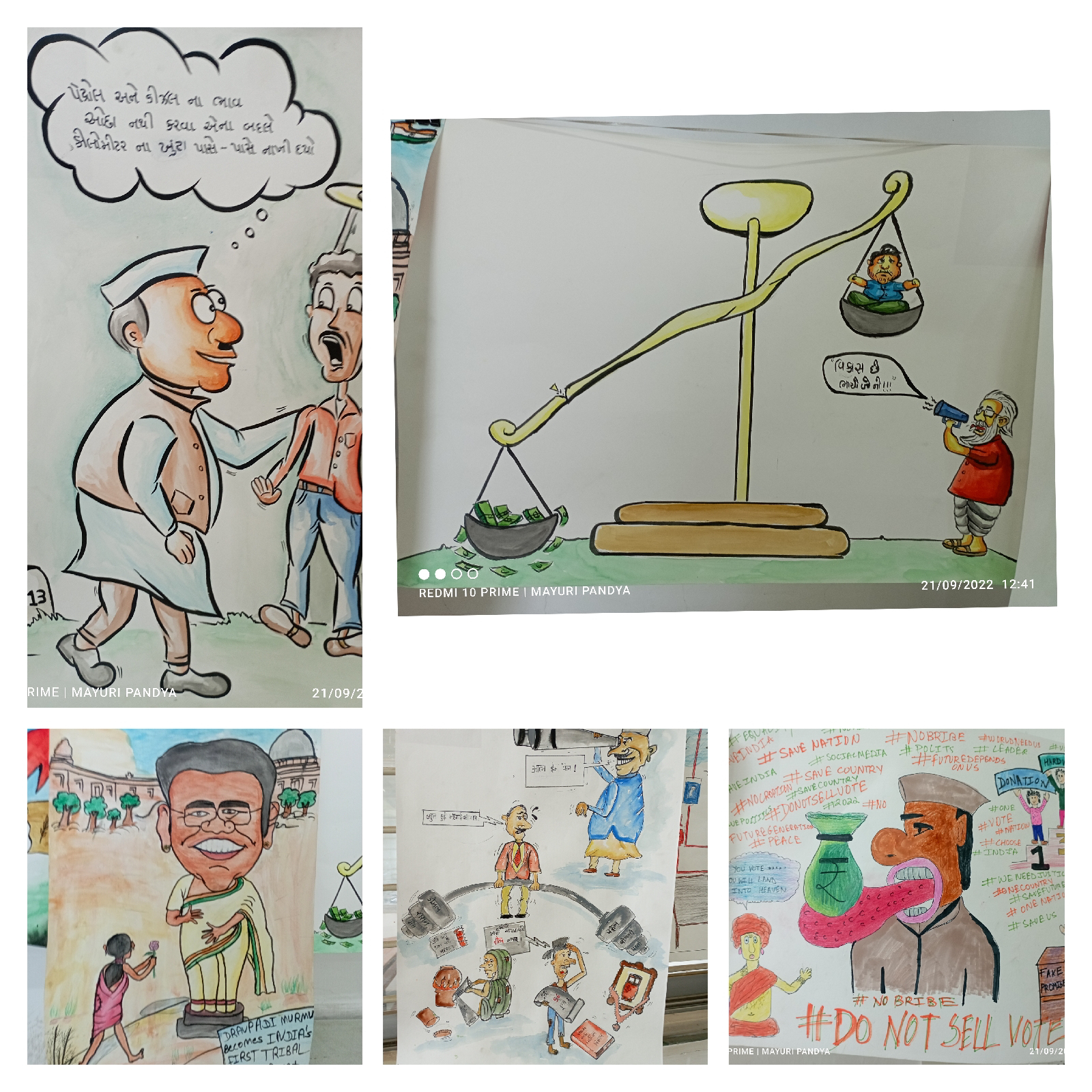 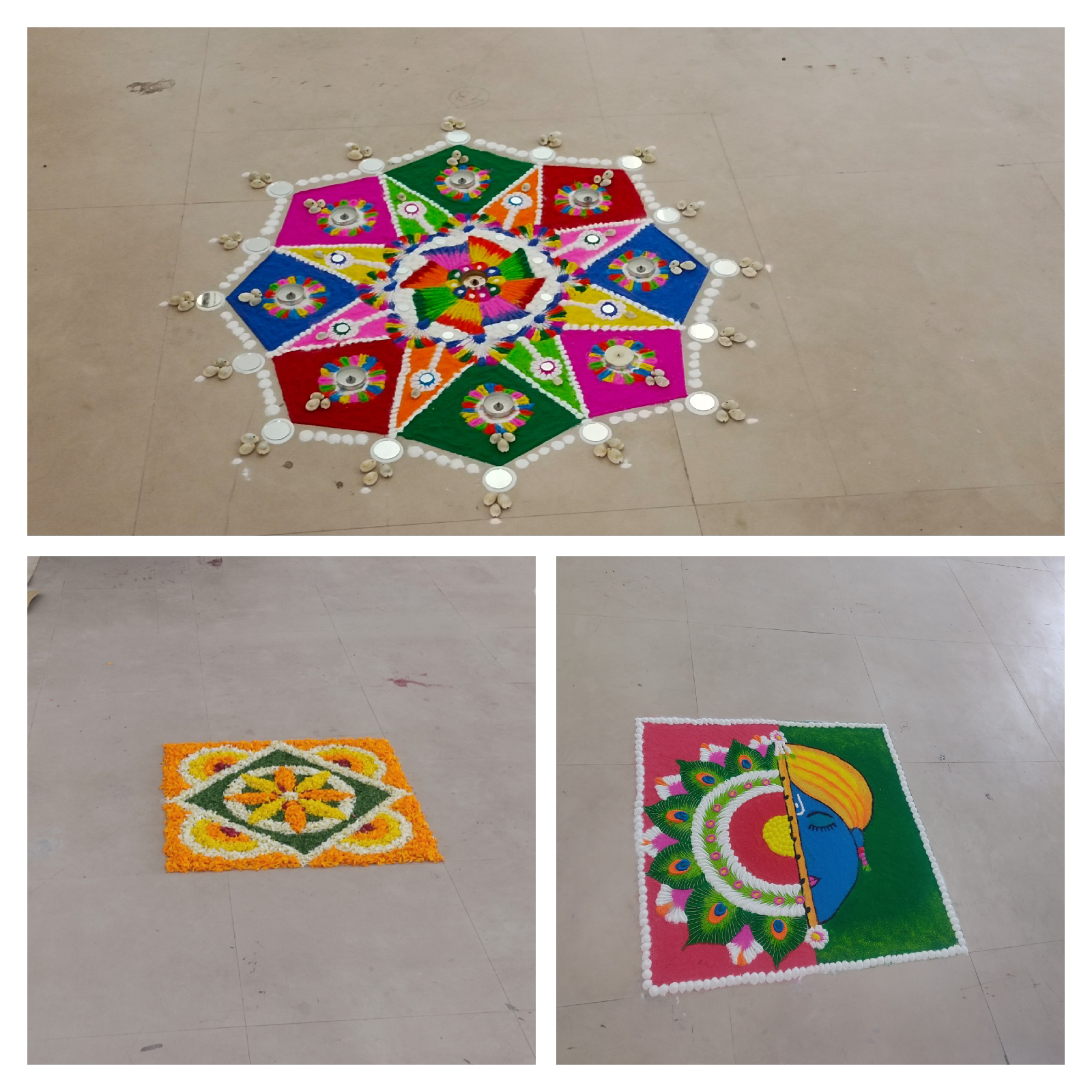 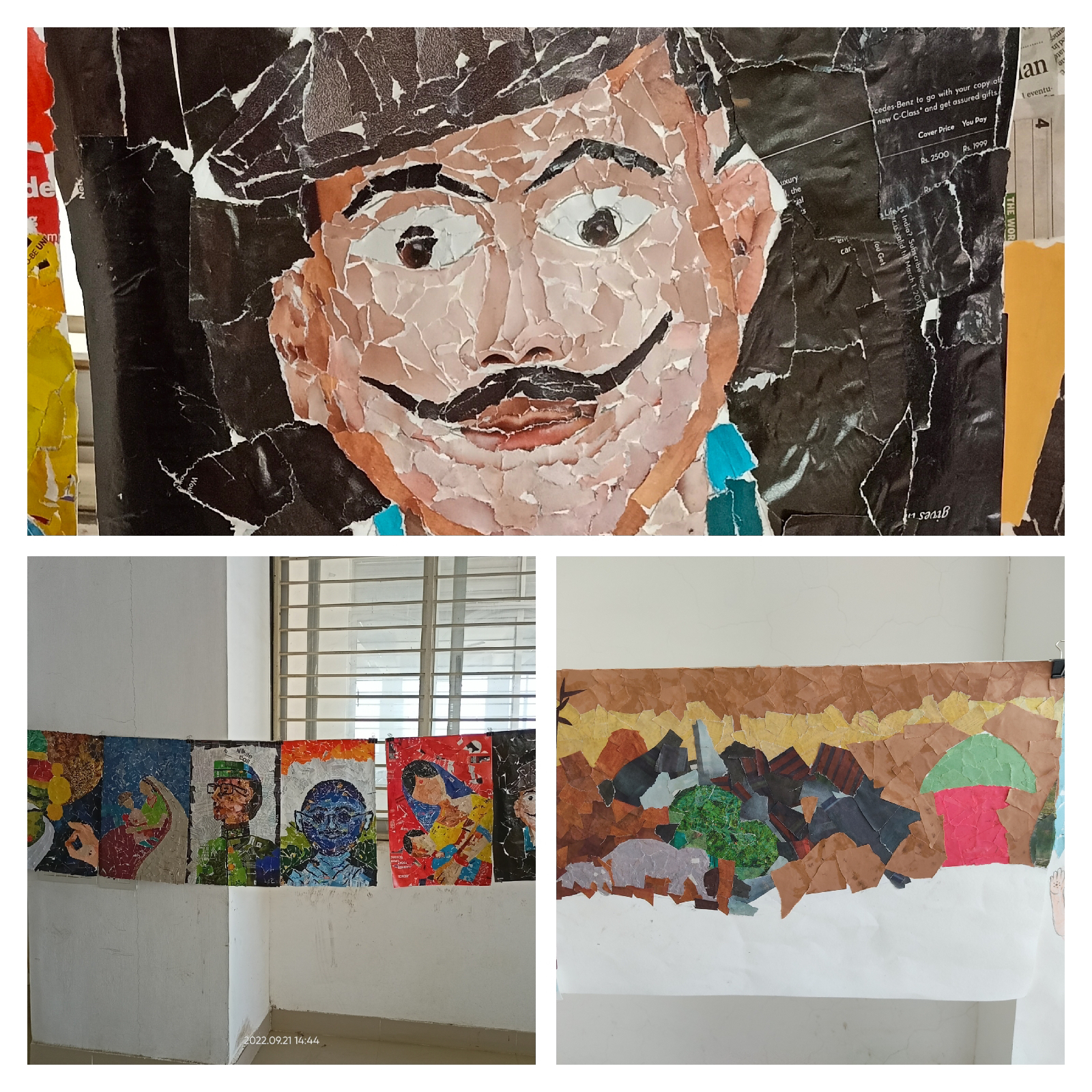 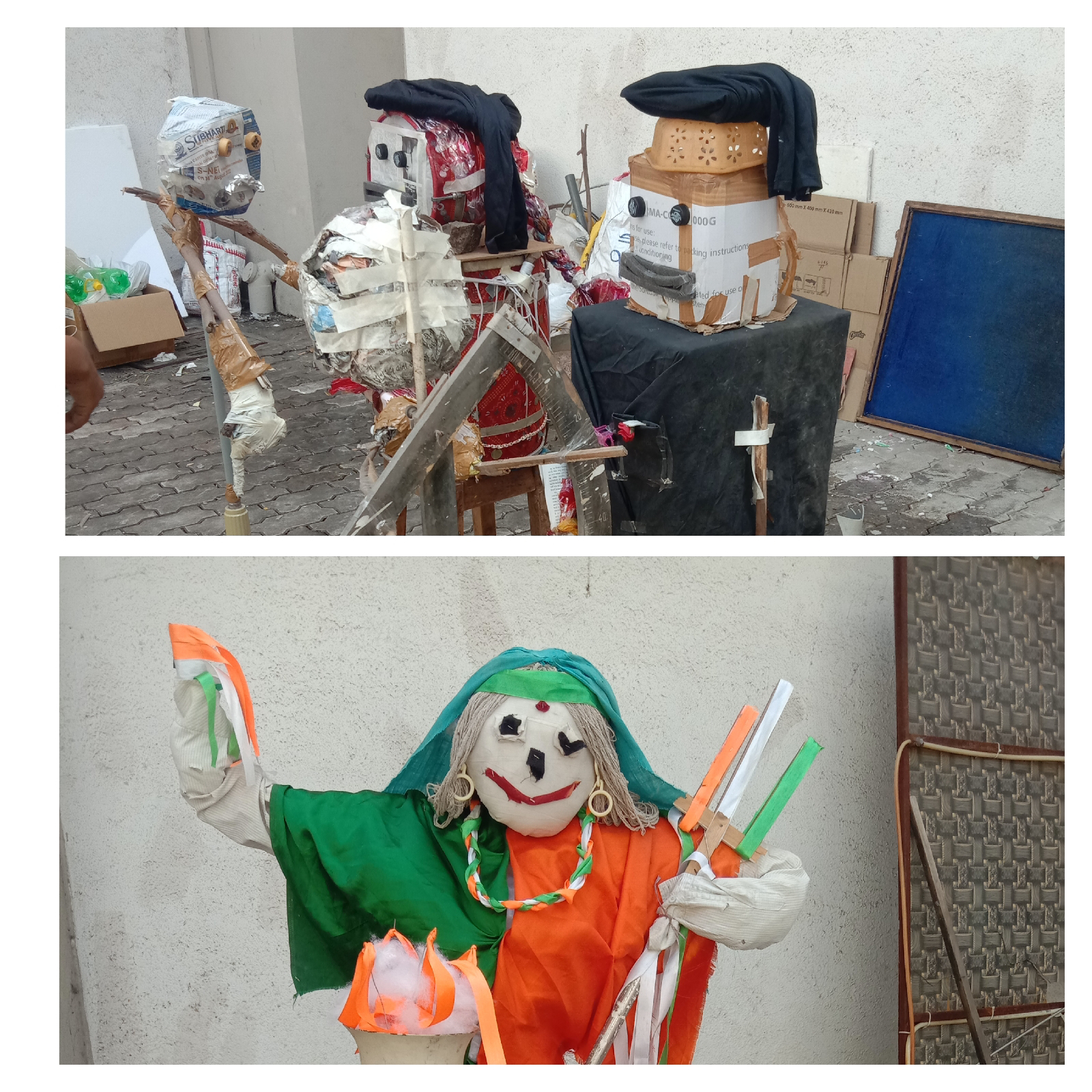 I am first time attending Youth Festival this is very new and amazing experience this is not only for entertainment but it was knowing ourselves various art represented by students.